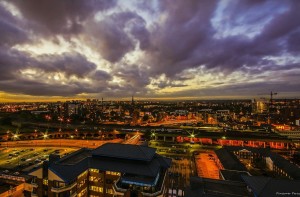 New Economy‘s October report has found that Greater Manchester’s economy has improved. The Northern city is becoming one of the fastest growing areas of the UK.

The report found that house prices in the area had risen 5.3% since 2013 and that there had been an increase in the number of new residents in Manchester and its surrounding areas, such as Salford.

There has also been an increase in the number of passengers at Manchester Airport, rising 6.1% from 2012. This could be for a number of reasons for example, residents are able to afford more holidays due to the economy or the fact thats Manchester is becoming a popular place to do business due to recent investments within the city.

Things are only set to improve for Manchester too with the announcement of the HS3 scheme, that is set to connect all the major Northern cities. Manchester’s economy is predicted to grow even further as an effect. Along with the HS3 scheme there is also the current renovation of Victoria train station and the proposed plans for Piccadilly train station, which will improve the transport links around the North of England even further.

New developments within Manchester are going to attract new residents. In preparation, worn down parts of the city are being renovated in order to make the whole city a nicer place to visit and live.

Manchester and Salford are also large student towns and the new transport links should produce an increase in the number of students in the area. More frequent services and halved journey times will allow better accessibilty for students who may have considered Northern towns too far away from friends and family.

Mistoria are property investment experts, specialising in student property located in the North of England. If you are looking to invest or wish to speak to someone about our range of property investments contact us by calling 0800 500 3015 or email us at info@mistoriagroup.com.